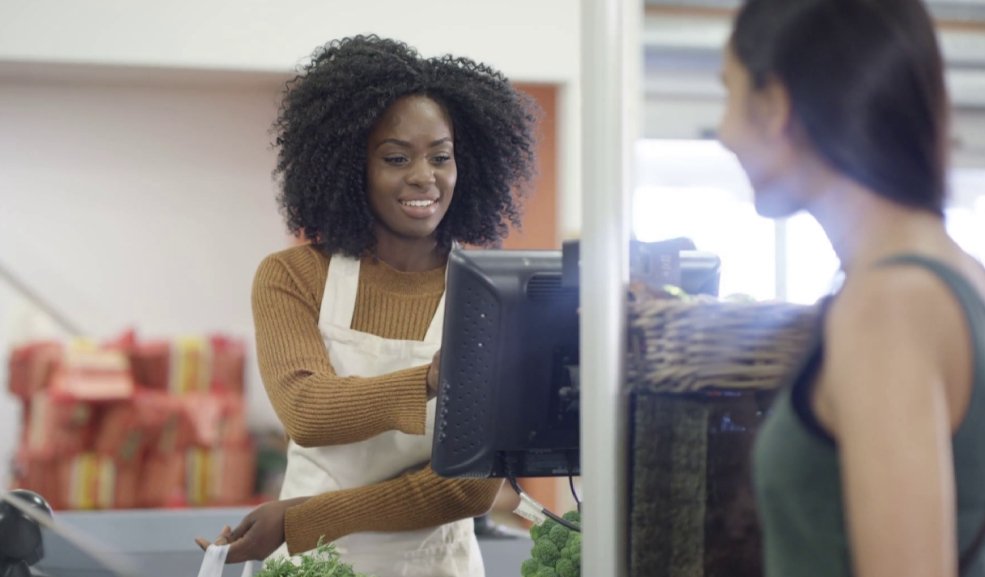 A few weeks ago, I went grocery shopping with my daughter and as our cashier, a young black woman, scanned and bagged our groceries, I was struck by the fact that she seemed absolutely miserable. It reminded me of my days working as a retail cashier and server and how demeaning and demoralizing most of my shifts were. I noticed that she never smiled, spoke only to tell me my total and barely looked at me throughout the process of bagging our groceries, and I contemplated the times that I had been branded “hostile” and “unfriendly” by (usually white) customers for the same behavior – simply doing my job with no over-the-top displays of enthusiasm.

To be clear, I wholeheartedly reject the myth of black women as “angry”, “unfriendly”, or providing poor customer service. Black women have always provided me with friendy service and been the most eager and willing to help and even go the extra mile for me, as both a customer and as a coworker, and I know I embodied the same energy in my customer service positions. But we’re also human. We get tired. We have bad days. We’re navigating a world of violence and oppression daily. If we seem upset, it is likely not personal, so why personify it? Why do people feel entitled to subject us to this emotional vampirism and use it as justification to demean us, berate us, try to cost us our livelihoods and even inflict physical violence against us?

A few days ago, a video went viral showing a young black woman being attacked by a white male customer while at work at a McDonald’s in Petersburg, Fl. The attack was reportedly in response to her not giving him a straw. And while the man has been identified, arrested and charged in her assault, it has also been reported that the young woman has lost her job as a result of the incident. If this is true, it would be disappointing, but not shocking in a society and social climate where “professionalism” is still defined by the amount of abuse an employee can endure without breaking character; a world where we are labeled rude if we show too little attention, overbearing if we show too much, and either of these “offenses” can result in complaints triggering disciplinary action that can cost our jobs at any point in time.

Is it a coincidence that these industries and positions tend to largely employ women, or that the majority of complaints of “unfriendliness” and “bad service” are made against women, with black women being the most likely to be called “angry” while at work? Absolutely not. Because in 2019, we still define a woman’s (especially a black woman’s) value in the workplace by how often she smiles, and that standard only gets hirer the less money you make. Because when was the last time you or someone you know took offense that an otherwise qualified doctor, lawyer, or teacher/professor failed to smile while doing their job?

Speaking of less money, did you know that black women make 61 cent for every dollar white men make (compared to the average of 80 cent to the dollar for all women?) Coupling that with the fact that black people still face hiring discrimination based on our hair, speech, names and other aspects of our identity unrelated to our qualifications, we have a reality where black women in customer service are more likely to be underemployed/employed in positions for which we’re overqualified for, overworked, overextended, and underpaid, all of which can be attributed to systemic racism. None of that offends you, but you’re offended by our humanity?

Imagine telling the lowest paid workers, who you are already using systemic racism to prey upon and exploit, that in addition to working menial positions we are overqualified for, being overlooked for advancement opportunities, not earning a liveable wage, and living in a state of perpetual disenfranchisement that the most important prerequisite to earning our living is the ability to suppress our humanity and pretend to enjoy our exploitation. And then, when entitled customers inevitably do us harm, abuse us, berate us and subject us to physical violence, our continued ability to barely sustain a living becomes contingent on our willingness and ability to wordlessly accept these traumas for poverty wages and a shot at further abuse in subjugation in a world that views us as nothing more than mules.